According to E. B. Nash 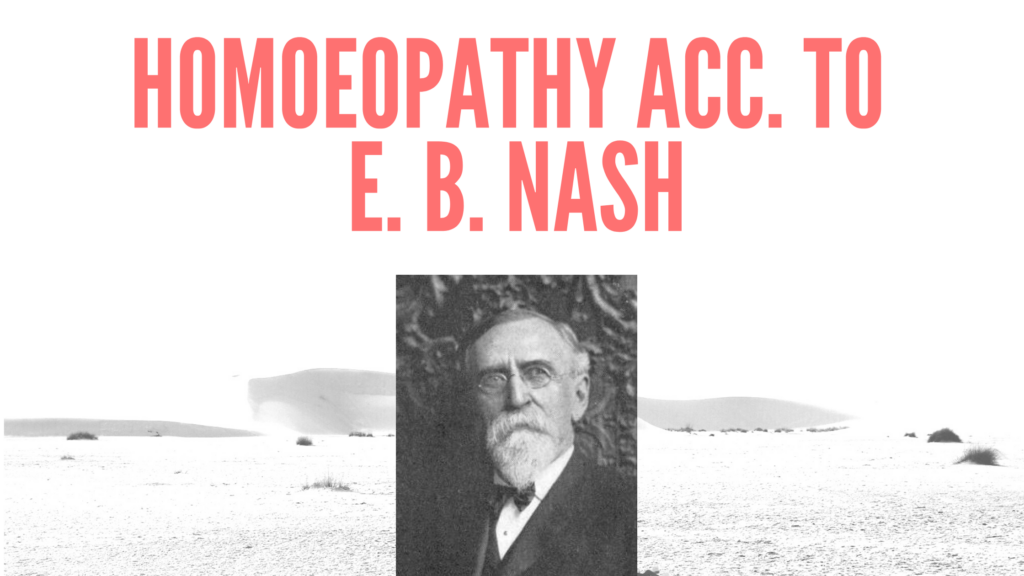 According to E. B. Nash – In my younger days I found great pleasure and profit in reading the writings of Hering, Dunham, Wells, Lippe and others, who have now ceased from their labors and gone to their well-earned rest.

I do not propose to adopt the usual way by beginning with Aconite and ending with Zincum, but to follow the bent of my inclinations, or, as it is sometimes expressed, the moving of the spirit: and may I not here invoke the aid of the spirits of the immortal Hahnemann, Boenninghausen and the galaxy of bright names that adorn the fair page of the history of Homoeopathy to help me.

First to fasten upon the mind of the reader the strongest pints in each remedy. Good off-hand prescribing can be done in simple uncomplicated cases if we have fixed in our minds, for ready use, the characteristics symptoms.

Second to try to discourage the disposition to quarrel over Symptomatology and Pathology. Neither can be ruled out and it is foolish to our school to divide on such a bone of contention. Every symptom has its pathological significance, but we cannot always give it in words: but the fact that it has such meaning is sufficient reason for prescribing on the Symptom or Symptoms without insisting on, or trying to give, the explanation.

Third to insist on the fact that the question of dose is still an open one, and so I have taken pains to give the dose I have found best, not insisting that anyone is bound to give the same; but it is fair to say that if they used a different one and fail, they must blame themselves, not me.

Fourth to condemn the abuse of drugs, both in the old school and ours.

Finally to express, after nearly forty years of conscientious experimentation, my firm and confirmed belief in simillimum, the single remedy and the minimum dose.

If you want to know more about homeopathy then please subscribe along through my weekly newsletter.

Diarrhea: Symptoms and Treatment in Homeopathy

Alcohol Addiction? Get Treated with Homeopathy.